How an international hospitality franchisor manages their cloud journey 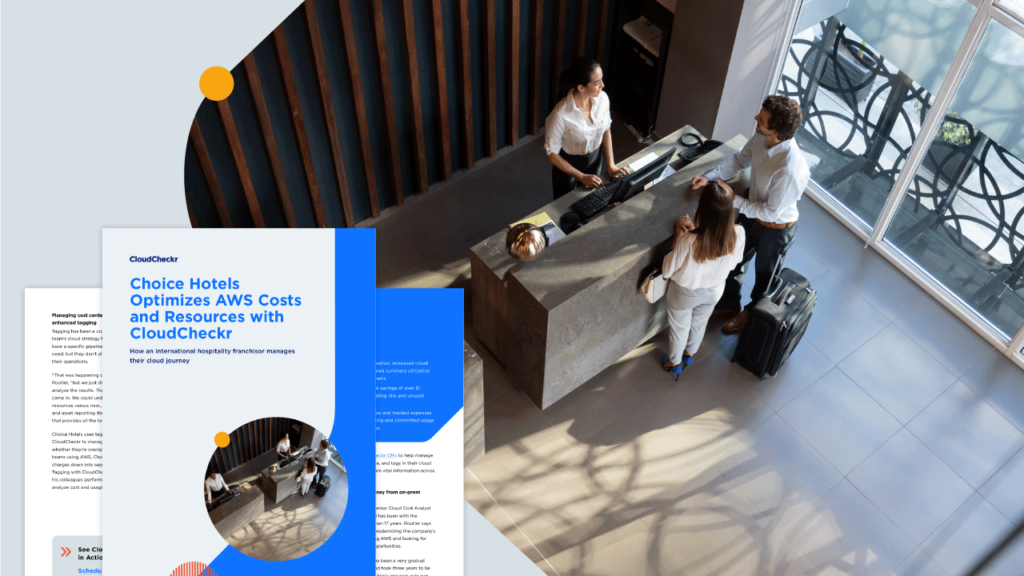 Choice Hotels uses CloudCheckr CMx to help manage the costs, governance, and tags in their cloud environment and share vital information across the organization.

Choice Hotels International is a hospitality franchisor with more than 7,000 hotel locations all over the world. They operate under 12 well-known brands to fit all budgets and lifestyles, such as Ascend Hotel Collection, Cambria, Comfort Suites, and WoodSpring Suites. Because of the sheer scale of booking options available, the inventory for all of these properties must be accessible 24/7 on the Choice Hotels website for guests to reserve accommodations.

In 2015, Choice Hotels began moving all of that data to the cloud, choosing Amazon Web Services (AWS) to ensure that all booking information is available across platforms, enabling guests to book and manage reservations from anywhere at any time. Choice Hotels uses CloudCheckr CMx to help manage the costs, governance, and tags in their cloud environment and share vital information across the organization.

Beginning the journey from on-prem to cloud

Mike Routier is the Senior Cloud Cost Analyst at Choice Hotels and has been with the company for more than 17 years. Routier says his role is two-fold: modernizing the company’s IT infrastructure using AWS and looking for cost optimization opportunities.

The move to AWS has been a very gradual shift, Routier said, and took three years to be fully operational. Routier’s previous role was Technical Program Manager (TPM) leading a development team migrating from legacy SOA architecture to rearchitected AWS distribution system choiceEDGE. Once Choice Hotels began the AWS journey, Routier realized they needed a solution to gain visibility into their cloud infrastructure.

Choice Hotels began using CloudCheckr in 2016, after calculating the potential costs of AWS without reigning in spend. The cost optimization and resource utilization features in the cloud management platform have been a crucial part of their modernization strategy ever since.

Routier is part of Choice Hotels’ Cloud Platform Engineering team, which he’s been on since 2018. He likens it to a Cloud Center of Excellence in that they help to create the standards when it comes to navigating the cloud. The team handles approvals for training and certification and sets the baseline for approved cloud technology solutions, such as which messaging service other departments should use.

Although his role is primarily in cost, Routier partners with other teams to help get results, regardless of function. Routier admits to “pushing an agenda regarding cost and security” — he thinks of it as a two-pronged approach, not just to save money but to minimize potential risk. For example, CloudCheckr might help Routier find an unused instance that doesn’t meet the latest security requirements.

To further these aims, Routier shares the reports and data in CloudCheckr with leaders, so that they can all make data-driven decisions. “Some leaders heavily use CloudCheckr for monthly reporting while others purely use what I provide,” he said. He points to the Advanced Grouping report in CloudCheckr CMx as helpful for executives and other business leaders.

Routier also ensures that Choice Hotels controls cloud sprawl through proper governance. That includes reviewing IAM roles, security, anything outside of cost, as well as reporting chargebacks to finance. Routier regularly interacts with other teams handling networks, security, and other functions at Choice Hotels to meet these objectives.

“It was very simple to use the CloudCheckr reporting for unused resources, idle resources — that’s definitely the easiest place to find that.”

Optimizing and modernizing to reduce waste

When starting their AWS journey, one of Routier’s most frequently used CloudCheckr features was Reserved Instance purchasing recommendations. Routier said that Choice Hotels was spending a lot on on-demand with EC2s and used CloudCheckr to find potential discounts. He needed to make sure they met as much on-demand consumption as possible and leveraged the reporting in CloudCheckr to help meet those goals.

“We didn’t know of a good recommendation system and so CloudCheckr does that,” Routier explained. “So we thought, ‘Oh, let’s use them and see what they recommend based on usage,’ and then do our own analysis because we know it’s going to be stable and productionalized… as that second pair of eyes to confirm this will be a good purchase and how we can take advantage of it.”

One place Routier found major savings was with unused resources. With recommendations from CloudCheckr, he was able to reduce provisioned EC2 resources (including instances, EBS volumes, and load balancers) from 6,000 to 4,500 — a savings of approximately $50,000 month-over-month. “It was very simple to use the CloudCheckr reporting for unused resources, idle resources — that’s definitely the easiest place to find that,” Routier said.

“CloudCheckr already knew with our EBS volumes that they were way oversized,” Routier said. “We were using the wrong type and likely the wrong provisioned IOPS. We were using io1, which is the most expensive you can use. We went through the exercise of modernizing the volumes to io2 and gp3 and that saved us $64,000 a month, or $770,000 annualized.”

Routier said that the Cloud Platform Engineering team created internal pipelines for releasing code on AWS infrastructure, which also includes spinning up said AWS infrastructure. With heavy adoption over the past year, there was an opportunity to clean up abandoned resources by using CloudCheckr. The process resulted in more than 1,200 resources removed in total: 550 EC2 instances, 600 EBS volumes, and 100 load balancers. This saved Choice Hotels $43,000 per month, or $516,000 per year, on their AWS bill for 2021.

This followed efforts in 2020 to reduce waste. Between March and May 2020, Routier and team conducted a thorough audit to find unused resources, system right-sizing opportunities, and any other AWS cost savings. After removing more than 2,000 resources, Routier estimates the company saved approximately $67,000 per month, or over $800,000 per year.

Tagging has been a crucial component of the team’s cloud strategy from the beginning. They have a specific pipeline to deploy what they need, but they don’t always have visibility into their operations.

“That was happening on the backend,” said Routier, “but we just didn’t have a good way to analyze the results. That’s where CloudCheckr came in. We could understand what were old resources versus new… by pulling the inventory and asset reporting through CloudCheckr, and that provides all the tag values.”

Continuing the cloud journey with CloudCheckr

“I can’t look at my AWS console anywhere and have it tell me how many resources we have —  for example, number of running instances, RDS databases, Lambda functions, or EKS clusters. I have no easy way of doing that right now [with native tools],” Routier said. “But in CloudCheckr, there’s a Summary Report that provides this information, so that’s extremely easy. We need that for capacity planning when it comes to monitoring our resources.”

Routier’s number priority, he said, is empowering business owners and helping them answer the question “What do I need to worry about?” The visibility in CloudCheckr CMx helps Routier address these concerns.

Learn more about what CloudCheckr can do for you by scheduling a one-on-one demo.

Avoid Costly Mistakes and Delays with Your 2022 Cloud Transformation Projects