Cloud Migration Lessons from the New Doctor Who: It’s About Time!

I recently attended New York City Comic-Con, and while it was not a business trip per se, I’m determined to make it tax deductible (just kidding, IRS!) So here’s an analysis of the newest episode of Doctor Who, and how it relates to cloud computing! Beware of spoilers!

As a longtime Doctor Who fan, it was thrilling to not only be in Madison Square Garden, witnessing the worldwide premiere on a big screen, but I was just a few rows away from the showrunner and cast of the show, including the newest Doctor, Jodie Whittaker. Yes, for the first time in the show’s many decades, including radio and TV, there will be a female Doctor Who. As the show’s tagline goes, “It’s About Time.” The Time Lord has regenerated into different bodies at least thirteen times that we know of. When she realizes she’s in a female body, she does mention that she forgot what it was like, so we can deduce that Doctor Who has been female before. The Doctor has existed for hundreds or perhaps thousands of years, depending on your source, so the thirteen individual portrayals that we have seen could just be the tip of the iceberg. 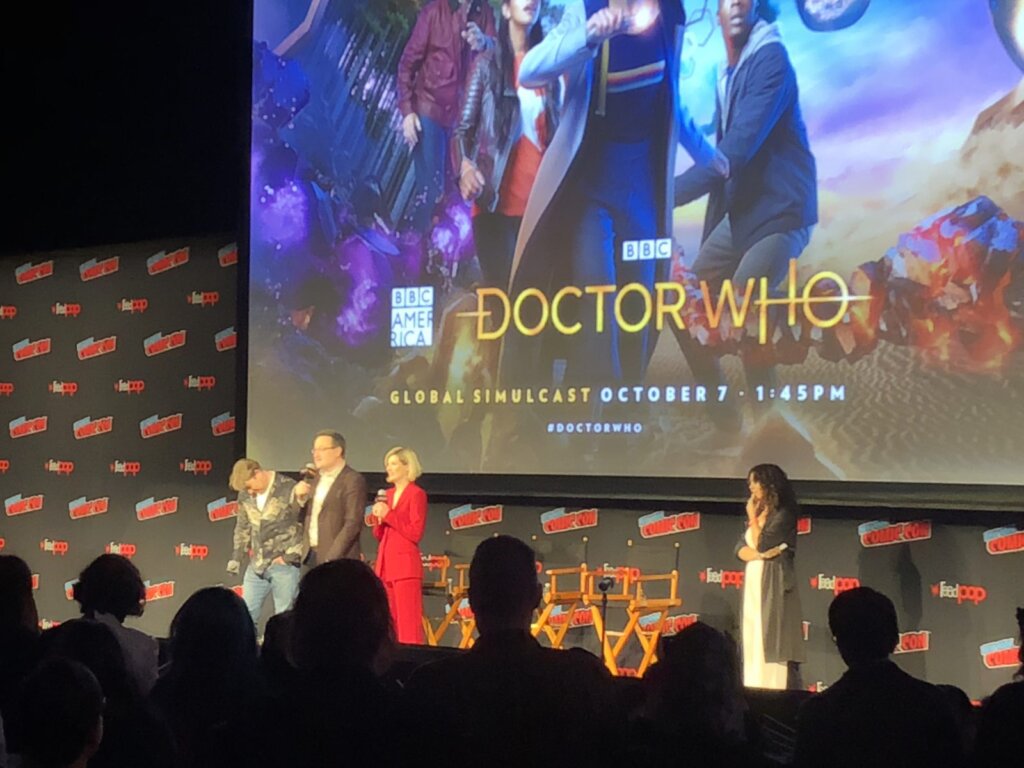 Worldwide Premier of Doctor Who at NY Comic Con 2018

What does this have to do with the cloud? Well, the title of the episode is “The Woman Who Fell to Earth” which implies she came from above, in the clouds or, even higher, in space… which is also where the episode ends. But of course, AWS and Azure servers don’t live in the atmosphere… they are located around the world. We use the term “cloud” to refer to the ephemeral nature of cloud computing. We don’t need to know the physical nature of the servers we use, just their virtual attributes.

Similarly, all of the actors who have portrayed Doctor Who have been old, young, male and now female. One consistency, to date, has been their nationality. Doctor Who is a British creation, and, just like James Bond, an American might be hard to accept. In a way, this is like security and compliance regulations. Many organizations, especially Public Sector customers, will require that their cloud computing servers and data must reside within their country, to comply with standards like FedRAMP and DFARS.

Fortunately, CloudCheckr provides Total Compliance scoring at no extra charge. And CloudCheckr is the only Cloud Management Platform of its kind that is authorized to run in the Intelligence Community’s Secret Region.

Doctor Who is a virtual entity, programmatically transferred to different physical hosts throughout time. That sounds a lot like an AWS EC2 instance or Azure Virtual Machine. When the Doctor first appears in a new form, there is an adjustment period. She even refers to this as her brain and body “rebooting” as she has memory loss at the beginning of the episode. But she does remember some of her “programming” which is to help others and “Be Kind.” It’s like non-volatile RAM or a backup snapshot or cache, which survives the transition.

The Doctor does need some hardware of her own. It turns out she hasn’t been following best practices, as her pockets have holes in them and she loses her Sonic Screwdriver. This Doctor states “I could build one. I’m good at building things. Probably!” but she clearly knows her STEM (Science, Technology, Engineering, and Math.) In fact, she goes all out and builds a Sonic Swiss Army Knife (minus the knife) not settling for a single tool to do the job. And since the episode takes place in Sheffield, England, she makes it out of the world-famous Sheffield Steel!

This reminded me of cloud management. You could try to compile assorted tools for cost optimization, security, compliance, billing and invoicing. But it’s far more convenient to have a single multipurpose tool, like a Swiss Army tool. If you can get one made with the best components then you’re not sacrificing quality for convenience. And to avoid losing the new Sonic tool, she gets a new wardrobe, with pockets, so she can follow best practices.

The other thing this Doctor has lost is the Tardis, her space and time traveling “”call box.” The remarkable thing about the Tardis is, while it looks like a phone booth, it’s “bigger on the inside” (or “smaller on the outside” depending on your perspective.) This is a lot like the cloud. It’s almost impossible to imagine how big the public cloud is, especially when you combine AWS, Microsoft Azure, Google Cloud Platform, and others. To help you visualize this, CloudCheckr has created ZoneCheckr.com, a free tool that displays the regions and zones of the various cloud providers on a single interactive map.

You might think you know how big your cloud footprint is until you get your bill. Your cloud could be a lot bigger than you thought. Many users will spin up an instance, and attach storage, then stop using that instance and terminate it, but forget about the storage or forget to terminate the instance. People think the cloud means you pay for what you use and no more, but the reality is you pay for what you order, even if you don’t use it. You will still get charged for unused and underutilized resources. CloudCheckr can help identify such waste and eliminate it. This is like the Daleks, the persistent enemy from the Doctor Who series. These robotic villains roll around systematically decontaminating with the exclamation “Exterminate!”

There’s another scene where the new Doctor has to make a leap and she falls a bit short, remarking that her legs used to be longer, referring to her previous host, played by the taller Peter Capaldi. In the cloud, you need to constantly be Right Sizing, measuring your utilization and determining if you need to increase or decrease your host size, or even change host types. CloudCheckr’s Right Sizing Report does this analysis and can even let you make the change at the click of a “Fix Now” button.

Finally, many data center experts might feel intimidated or even threatened by the cloud. It’s all very “alien” to some. The Doctor is also an alien, yet she is familiar to us. Many of the hardware skills I learned (and taught for sixteen years at computer maker Sun Microsystems, now part of Oracle) are indeed transferable to the cloud. For example, AWS’ EFS (Elastic File System) is essentially descendent of Sun’s NFS (Network File System.) The Doctor offers advice for the humans she encounters which we could all benefit from. “Don’t be scared. All of this is new to you, and new can be scary.” Indeed, while this new season of Doctor Who will be scary, it should also be great fun. So should your cloud journey.

Keep up with the Latest in Cloud

Check out our Resources Center for cloud industry news, research, webinars, and more.