In May 2017, Microsoft announced plans for two new Azure cloud regions in South Africa, which are due for launch later this year. As a result, it will become the first of the leading cloud vendors to offer a direct presence on the continent, with data centers located in Cape Town and Johannesburg.
Hot on the heels of Microsoft, Amazon then announced in September it would be opening a new AWS cloud region in Bahrain in 2019—a move that made it the first major cloud provider to invest in the Middle East.
Both announcements came on the back of a series of new data centers scheduled for construction across Europe. These included AWS regions in Paris, which opened in December 2017, and Stockholm, which will begin serving Scandinavia later in the year. Likewise, Microsoft Azure and Google Cloud Platform have new data centers in the pipeline for France and Finland respectively.
This rapid increase in data center coverage not only serves as a boost to the digital economy in Europe, the Middle East and Africa (EMEA) but is also a signal of the strong potential for enterprise expansion in the area.
The case for cloud investment in Africa and the Middle East, in particular, is supported by a recent Gartner study, which estimated current growth in the MENA region at 20–25%. Similarly, according to a Cisco study into global cloud trends, the Middle East and Africa can expect the biggest growth (41%) in cloud traffic over the five-year period to 2021. This is closely followed by Central and Eastern Europe at 38%.
But, despite the promising outlook for the area, enterprises still face roadblocks to cloud adoption in many EMEA countries. So, in this post, we discuss both the opportunities of cloud expansion and the challenges multinationals must overcome to gain a strategic advantage in both established and emerging markets of the region.

By contrast with the US, Europe is a fragmented market made up of different countries with data protection laws and has been slower to adopt the cloud.
But the landscape is set to change now that the EU General Data Protection Regulation (GDPR) came into force on 25 May 2018. Comprising an extensive list of privacy controls and best practices, GDPR harmonizes data protection regulations across the EU. This will ultimately open up more opportunities for cloud expansion by simplifying regulatory requirements for operations in more than one EU country.
Middle-East countries reliant on a volatile oil industry are taking steps to diversify their economies… by expanding into tech?
Meanwhile, Africa is home to the world’s fastest growing cities and has an exploding tech startup ecosystem. Mobile phone revolution in Africa is breeding a new generation of digital natives. Additionally, demand for streaming video services will lead to better cloud services and conditions that are ripe for new cloud business/multinational companies.
The Middle East and Africa also hold great promise for many cloud-related technologies, such as big data and the Internet of Things (IoT). For example, better crop management in areas of unpredictable rainfall and health monitoring of outpatients in remote areas. Also prime targets for the first commercial drone delivery services, alongside standard use cases, such as manufacturing and freight monitoring.
Moreover, both Africa and the Middle East have a developing ecosystem of start-ups and SME, which will be able to leverage the cloud to get their IT systems up and running.
More regionally located data centers will inevitably stimulate more growth as demonstrated in India.
Also underdevelopment can be an advantage, as many EMEA countries can become the new frontiers for the latest technologies without being held back by legacy systems and infrastructure.
This will inevitably increase the momentum, as the effect of the cloud snowballs/mushrooms, with yet more network infrastructure, cloud data centers, more skilled cloud professionals, more confidence in the cloud computing model and more businesses exploiting the benefits. Cloud adoption across the EMEA region looks set to mirror that of the US.

For international businesses, including those headquartered in the U.S., cloud expansion in Europe has sometimes lagged behind cloud adoption in North America.
However, the challenges holding them back (complex regulations, fewer regional data centers, skills gap…) are beginning to diminish. Keep the following concerns in mind when planning to expand into EMEA or adopt a cloud-first approach in Europe.

Poor connectivity has fostered an on-premise IT culture. But issues of bandwidth not only an issue in terms of the quality of connections to infrastructure. Also, with demand outstripping supply, it’s also a matter of cost.
Customers/clients/users access cloud apps via mobile broadband connection. This makes monitoring your cloud and cost-efficient application architecture very especially important.

Limited competitive choice in Africa, ME (just Alibaba) and especially Eastern Europe where none of the three market leaders currently have plans for expansion.
In other words, as with the Middle East and Africa, Eastern Europe currently experiences the same problems of regional coverage, where the nearest data center can be thousands of miles away, increasing application latency. 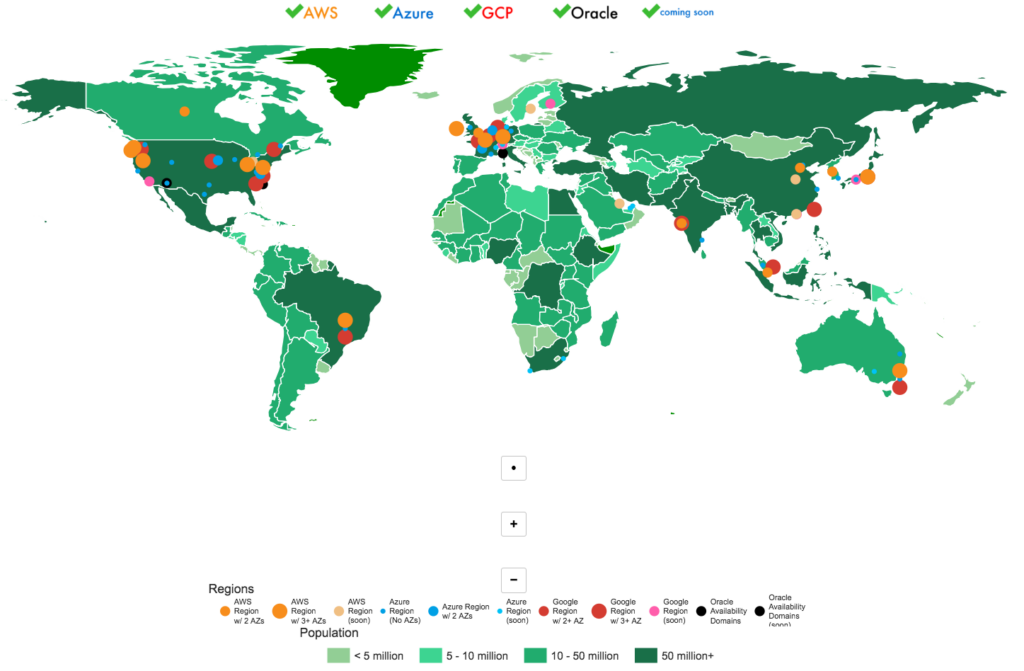 Although GDPR will unify the data protection laws of EU countries into a consolidate set of rules, it also will enforce stronger measures for the protection of personal data. For example, it also imposes tighter restrictions on the transfer of personal data outside the European Economic Area (EEA), which may have implications for cloud-based systems with regional fault tolerance.
The new law applies to any organization that collects data about European EEA citizens wherever it’s based in the world. This will also include data about British nationals, as the UK government intends to incorporate GDPR into its own laws after Brexit.
GDPR introduces a new level of complexity to compliance for virtually any organization with European customers or employees. However, compliance will also put enterprises in a stronger position to expand their cloud operations into the European market (easier to comply across continent as whole). [Any multinational company with a cloud-first initiative will have an advantage in these markets…]
As data processors, all three leading cloud platforms, AWS, Azure and Google Cloud Platform, are in the process of becoming GDPR ready in time for the May deadline. Nevertheless, as a data controller and part of your shared responsibility with cloud providers, it’s essential you understand your own role in GDPR compliance.
Data protection challenges aren’t just restricted to the EU. Fragmented regulations also holding both the Middle East and Africa back.
Not only are there no common data protection laws, such as in the EU, but many Arab countries, including Saudi Arabia and the UAE, lack clearly defined regulations.
And the current position in Eastern Europe isn’t any easier either. For example, Russia recently introduced legislation stating that personal data provided by Russian citizens online must be stored in data centers within the country.
In the face of these challenges, hybrid cloud is set to emerge as a popular way forward for cloud adoption in many EMEA countries, as it offers a choice of infrastructure depending on application requirements for compliance and security.

Cybersecurity knowledge is less pervasive in the Middle East and Africa. Therefore global enterprises simply cannot rely on local expertise. Even though cloud is more secure than traditional on-premise IT, the shortage of security skills underpins the reason why EMEA organizations are reluctant to adopt new and unfamiliar technology.
The answer is more cybersecurity education, as well as raising awareness of the strategic benefits of cloud at the same time.

Shortage of cloud skills means talent comes at a premium. In addition, hourly rates for cloud infrastructure are generally higher outside of the US. So, despite the clear benefits, this can make the cloud appear expensive in less developed areas of the world, which have weaker currencies.

The cloud landscape is rapidly changing. New cloud services and data centers are launching all the time.
So it’s essential to start training, staffing, planning so that your business is cloud ready—whether starting a new IT project, migrating on-premise systems or extending your customer base. Also mention researching the tools and services you need to ensure compliance in your new markets.
The cloud is transforming IT, bringing agility, cost efficiencies and worldwide customer reach. Ultimately you’ll have no choice but to leverage the cloud if you’re to compete on the global stage. So now’s the time to act if you want to stay ahead of your competitors.
CloudCheckr supports users across the globe. Schedule a demo to learn more about what we can do for you.

Instaclustr and Service Providers: Unlocking the Value of Data for Customers, Together

How MSPs Can Create Confidence in the Cloud